Istanbul Grand Bazaar: the first shopping mall in the world 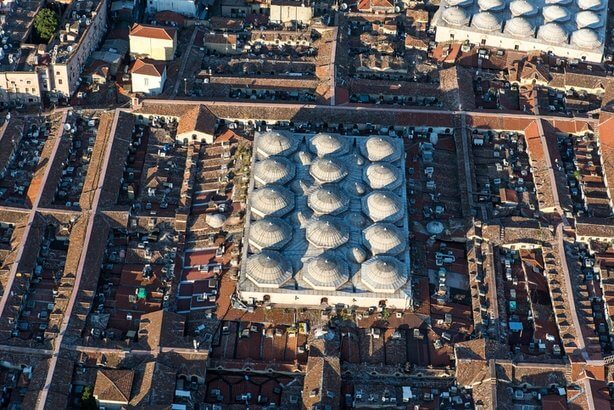 The Grand Bazaar is located in Istanbul, the largest city in Turkey, and its history dates back to the mid-15th century, during the time of Sultan Mehmet II, the conqueror.

The construction of the Grand Bazaar in Istanbul began in 1461 on the orders of Sultan Mehmet II.

This bazaar is the first shopping center in the world and today still one of the largest. It would not be wrong to say that 500 years ago, this bazaar was the place where the heart of the business world beat.

It is recognized as the oldest and largest shopping center in the world, and it covers an area of ​​45,000 square meters of covered space. It is structured in 64 avenues and streets and 14 courtyards with 3600 stores.

During its heyday in the Ottoman era, the extent of the area covered and the number of shops were far greater than those of today.

The Grand Bazaar was the center of the Ottoman economy and today is the top choice for shopping for those visiting Istanbul.

On some days, the number of visitors reaches half a million.

It is possible to buy exceptional handicrafts here: carpets, handbags, textiles, gold and silver jewelry, antiques and enameled porcelain, and many other souvenirs that would bring back pleasant memories of your visit to Turkey. .

You will find that some of the stores you visit sold the same products centuries ago with the same commercial culture.

Who knows, maybe one of your ancestors visited Istanbul, probably the most important city for visitors from the old world, and shopped at the same stores you visit.

Even if you spend an entire day visiting the Grand Bazaar, where traditional meets modern like everywhere in Istanbul, its sheer size makes it nearly impossible to see it all in a single day.

Although you can find traditional goods inspired by the Ottoman era in the Grand Bazaar, you will also find many contemporary products.

There are also many other shopping options around the Grand Bazaar.

The road that stretches between the Grand Bazaar and the Nur-u Osmaniye Mosque is where you will find the sellers of the most beautiful carpets as well as other oriental products.

There are also other shops in the Sultanahmet area where handcrafted souvenirs as well as other traditional products are sold.

For lovers of old books, the Sahaflar market located between the Grand Bazaar and the Beyazit mosque is a must.